Paris, 1 october 2018 – Novocomedy, distributor of funny comedy shows and clips throughout the world, is thrilled to announce a new distribution deal with Youtubers’ talent agency FAM Networks for their already famous program “Pranks Network After Dark”.

The series – 30 episodes of 22 minutes – is already available for licensing and will be showcased at MIPCOM on Novocomedy’s booth  (R7F6). The show is a compilation of FAM Networks’ best pranks : scary, outrageous, hilarious, the show cannot leave your viewers indifferent. Already broadcast on linear channel TBD network in the USA, it has been met with great reviews and ratings.

“Going worldwide with Novocomedy as our distribution partner is the new big step for us. We have been working with digital comedy creators for many years in the USA, helping them develop their talents on Youtube and other digital platforms. With the overwhelming success of our debut television show “Pranks Network After Dark”, supported by the second largest television station provider in the US, Sinclair Television Group, it is only logical that we decided to bring it to the rest of the world. We needed a partner who understood the spirit of pranks and we really believe we found just the right match” says Keith McElwain, founder and CEO of FAM Networks.

“I have been producing and selling pranks all over the world for the last 20 years”, says François-Xavier Poirier, Novocomedy’s founder and CEO, “so I am very excited and happy to promote the work of a new generation of pranksters ! The world needs to take itself a bit less seriously and laugh more. Pranks are, in my opinion, one of the best ways to achieve both. We really look forward to make this collaboration with FAM Networks a real success, all over the world, on all screens.”

Novocomedy is a distribution company founded in 2009 based in Paris, France. Its catalogue contains one of the widest collections of funny and entertaining shows in the world, boasting more than 2000 hours of HD content ranging from candid cameras to home videos as well as magic, circus, sport or animation. Working hand-in-hand with its California-based production partner, Redwood Media, Novocomedy’s goal is to provide quality and highly entertaining programming to traditional TV broadcasters and VOD platforms around the world.

FAM Networks is an influencer talent management agency with offices in Los Angeles and New York. FAM Networks represents 50+ of the top social influencers around the world garnering more than 1+ billion views per month. Distinguished for its ability to produce and market intellectual property across multiple platforms, FAM Networks is pioneering the distribution of premium digital content to web and TV, and is best known for producing the hit series “Pranks Network After Dark”, which has garnered more than 100M+ views. FAM Networks also boasts an unparalleled track record for delivering highly successful branded content initiatives for brands including Disney, Viacom, Kellogs, and many more.

Latest News
Back to News 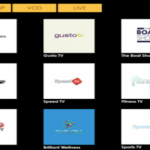 Novocomedy — OneHubTV Vision 24/7Events, Updates
We use cookies to ensure that we give you the best experience on our website. If you continue to use this site we will assume that you are happy with it.OkNoPrivacy policy
Revoke cookies